The Fukushima accident proved one more time the necessity of computer codes for modelling of radionuclides migration in the marine environment. After the accident radionuclides were discharged and leaked into the sea with contaminated waters as so as fell-out from the atmosphere. According to most researches, in the spring of 2011 the most important sources of radioactive pollution of the sea were direct inflows of contaminated water. In the longterm, due to contamination of river basins, the inflow of radionuclides with river waters may become the most significant source. Sr, I and Cs tend to migrate in seas in dissolved state due to small values of Kd (distribution factor water – suspended sediments). However Kd of Cs in fresh water is much higher. Thus it can be assumed that most of Cs entering the sea with a river flow will be sorbed on suspended particles. Sedimentation of the particles can lead to development of contaminated areas of bottom sediments. It can lead subsequently to secondary contamination of the seawater due to desorption of Cs in salt water and resuspension of contaminated sediments. Thus modelling of radionuclides migration in water bodies in different phase states is an important radioecological problem.

Brief description of computer code POMRAD:
The three-dimensional computer code POMRad is a tool for solution of the problem. It can be used to implement the following cycle of modelling:
– Hydrodynamic simulation – computation of currents and other important characteristics.
– Suspended sediments transport modelling (cohesive, noncohesive and “hot particles”).
– Radionuclides transport simulation (taking into account decay, sorption, desorption, etc).
The base of POMRad is hydrological Princeton Ocean Model (POM) (Mellor, G. L., 2004) supplemented by other necessary models.

The modelling of inflow of 137Cs from the rivers showed that areas contaminated bottom sediments would form in the immediate vicinity of river mouths. On spots with characteristic size up to 100–200 m the rate of 137Cs activity increases and can reach up to 2000 Bq/(m2·day). Due to significant uncertainty of the input data the results should be treated as assessments. The modelling of long-range radionuclides transport in months following the disaster showed that most of the activity migrated to the central part of the Pacific Ocean. In spite of intensive dilution, specific activity of 137Cs exceeding background on two and more orders of magnitude could be registered in thousands kilometres from the NPP (figure). The simulation showed that leak of 7.1·1011 Bq of beta-activity in the spring of 2013 could lead to additional 220 Bq/m3 (locally) in seawater at distances up to several kilometres from the NPP. In 20 days after termination of the contamination the highest possible additional activity decreased due to dilution to 0.8 Bq/m3. Even if the activity of the leak was underestimated on 3 orders of magnitude and 90Sr was responsible for all of the beta-activity it could not lead to significant contamination of fishery products.
Simulation of radionuclides transport is necessary for realistic assessments of danger of radioactive contamination of the marine environment. Prediction of development of contaminated areas of bottom sediments related to radionuclides transport by rivers would supplement the picture of contamination of the marine environment and would enable more accurate assessments of long-term radioecological consequences of accidents. Availability in POMRad of two different radioactivity transport models (trajectory and finite-difference) makes possible to choose one more suitable for a specific problem. 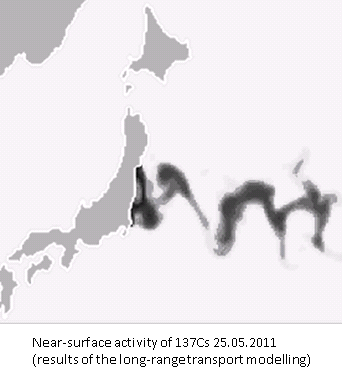