River freshwater input is crucial in modelling global ocean. Most ocean models used in CMEMS services rely on climatological river discharge data with various deficiencies, which can lead to biased simulated ocean states. The main objective of the BRONCO project is to provide improved and standardised input of land freshwater to global, regional and coastal ocean models, generated by global hydrological model driven by an atmospheric forcing that is consistent to the ocean mode.

could potentially be used for operational implementation in the future. This new data set is capable of providing land freshwater input with unprecedented level of temporal (daily) and spatial resolution (0.1 degree) to global and regional ocean models. In using the same atmospheric boundary conditions (ERA5) in both the hydrology and the ocean components, existing inconsistencies in the input to oceans will be removed. Evaluation results suggest that the overall performance of this new river discharge reanalysis is reasonably good in general when verified against a global network of 1801 discharge observation stations. The full GloFAS-ERA5 river discharge reanalysis is now available via the Copernicus CDS store at https://cds.climate.copernicus.eu/cdsapp#!/dataset/cems-glofas-historical?tab=overview.

The second major outcome of this project is development of a new conversion method to implement GloFAS-ERA5 river discharges into the NEMO model, which is the most commonly used ocean model in CMEMS services. Most parts of this conversion method are generic/automatic and can be easily adapted for different configurations of NEMO model (global or regional). This method has been tested by converting GloFAS-ERA5 reanalysis into NEMO compatible land freshwater input in its ORCA025.L75 configuration. The newly developed conversion software and a time-series of NEMO compatible land freshwater input between 1979 and 2017 have been delivered to MOI as part of the project deliveries.

Scientific evaluation of this GloFAS-ERA5 land freshwater input has been carried out with the operational ECMWF ocean analysis system-OCEAN5, driven by the same ERA5 atmospheric forcing. Evaluation of simulated ocean state against in-situ observations show improvements in the Red sea, the Mediterranean Sea, North Sea, Baltic Sea, Baffin Bay and regions affected by Amazon freshwater input when GloFAS-ERA5 instead of the DRAKKAR climatology of land freshwater input (BT06 hereafter) is used. This is achieved by reducing a negative sea surface salinity bias in these regions. Improvements in large-scale ocean circulations like the Atlantic Meridional Overturning Circulation and Antarctic Circumpolar Current are also noted after decadal integration of the ocean model with the full time-series of GloFAS-ERA5 land freshwater input. However, negative impact from switching to GloFAS-ERA5 is visible in several regions, e.g. in the Maritime Continent, west coast of central America and Gulf of Alaska. These are normally associated with a large positive bias in the GloFAS-ERA5 river input that contribute to these regions. This issue can be mitigated by applying bias-correction to the GloFAS-ERA5 input, and/or by adding extra vertical mixing in several affected regions that are close to the river mouth.

By introducing GloFAS-ERA5 river discharge reanalysis into the CMEMS services, we create links between different Copernicus services such as C3S (ERA5), CEMS (GloFAS) and CMEMS. It allows us to strengthen the European coordination in climate monitoring and land-ocean coupling. The development in this project is the first step towards an improved connection and coupling between ocean and land surface and hydrological models. 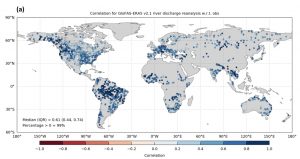 Figure 2. Differences of RMS error in (a) temperature (in K) and (b) salinity (in PSU) from two NEMO simulations with land freshwater input from either GloFAS-ERA5 (without bias correction) or BT06 discharges. RMS errors are averaged over the upper 200m of ocean and against all available ocean in-situ observations among 2010-2017. A negative value (blue) means that NEMO+GloFAS-ERA5 simulated ocean states is closer to observations compared to the one produced by NEMO+BT06, while a positive value (red) means the converse. 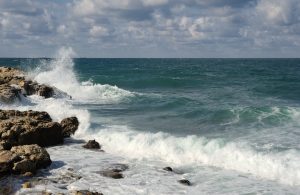