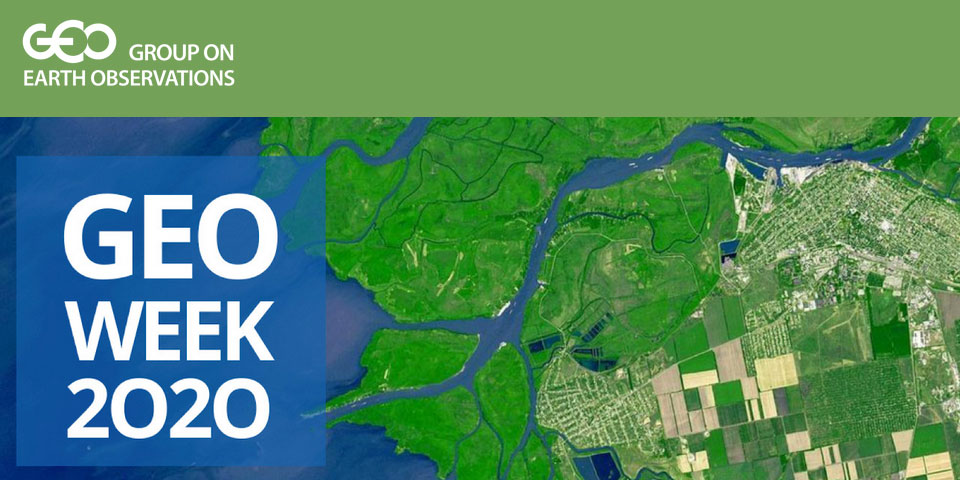 GEO Week 2020 is being held from November 2nd to 6th as an online event. There will be several contributions from Mercator Ocean international (MOi) including an official statement from our Director General Pierre Bahurel on past achievements and future endeavours including the upcoming project entrusted to MOi called EU4OceanObs. In addition Laurence Crosnier, MOi head of marketing and communications, along with Thierry Ranchin, Director at the Centre Observation, Impacts, Energy MINES ParisTech, led a session on “Ideation: Leveraging Earth Observation to promote sustainable marine activity and the Blue Economy ».

Last year, at the Canberra Ministerial Summit the Group on Earth Observations (GEO) hosted Ministers from GEO’s 111 Members to endorse a bold and ambitious approach to open data sharing to ensure that Earth observations benefit societies and economies. GEO Week 2020 will showcase the efforts to implement the Canberra Declaration by highlighting initiatives from GEO Members, Participating Organizations and Associates in a series of live discussions and interactive content. The GEO Highlights Report will be launched as an interactive website and PDF showcasing the impact of the GEO Work Programme with highlights from 2020.

Patrick Child, Deputy Director-General European Commission Research and Innovation and European Co-Chair of GEO, helped kick-off this year’s GEO week and gave insights on the GEO week programme that will take place during the conference. He offered the European perspective not only on progress made in the past years in domains such as climate change, food security and marine health, but he also outlined the upcoming goals and continued international cooperation for the development and democratization of Earth observation data.

During his statement, Pierre Bahurel,  made the case for the growing importance of the ocean in the new global economy and for Earth observation as its greatest asset. MOi was named a GEO participating organisation in 2019, though MOi has been following GEO guidance for many years. MOi has some 25 years of experience in building and distributing global ocean knowledge and complex ocean-monitoring systems. It also supports global initiatives, goals, and frameworks like the SGDs, and to the agenda 2063 through a partnership in Africa. He discussed how MOi has set forth new goals and engaged in projects to reinforce its cooperation and participation in the global efforts for Earth observation.

“I am particularly glad and proud to announce that Mercator Ocean international will be heading the GEO Blue Planet European office starting at the end of 2020,” announced Bahurel. He elaborated on the new frontier for MOi and the field of operational oceanography, stating: “State-of-the-art ocean observation and monitoring based on Copernicus assets, combined with advances in IT such as high-performance computing, big data, artificial intelligence and digital twins, will help us to design a drastically new digital ocean.  And this how we will contribute further to GEOSS and the new GEO strategic objectives for 2025. A new digital ocean will soon emerge that will serve the ocean”.

See more on the new initiatives, commitments and policies in GEO Member Statements on the #GEOWeek2020 website here.

As a part of GEO Week 2020, on November 3rd-4th there are industry track sessions. The Virtual Industry Track is dedicated to connecting the Earth observation industry with GEO Associates and the GEO Work Programme. This virtual event and platform links stakeholders from across the globe to engage in topics including agriculture, the ocean, sustainability, collaboration, and more.

As part of this, on November 3rd,   Thierry Ranchin and Laurence Crosnier held an ideation session about the blue economy. This includes a group of some 30 blue economy actors to collaborate and discuss ideas pertaining to how they would like to benefit from Earth observation data for their own business needs. Many topics and tools will be broached such as co-design, use cases, trainings, user feedback mechanisms, the need for more user tools to better harness marine data, visualisation tools, and tailor-designed workshops.

What is the new GEO Blue Planet European office?

The project is called EU4OceanObs and was announced by the European Commission during GEO Week 2020 (Online Events, 2-6 November 2020). The European Commission’s Service for Foreign Policy Instruments (FPI) has initiated a global international In Situ observation long-term strategy complementary to satellite observation, embodied in the Action “International ocean governance: EU component to global observations”. This will be carried out during a 2 year-project, entrusted by the European Commission to Mercator Ocean International (EU4OceanObs).  One major objective is to strengthen EU contributions and achievements in two overarching international programmes:  GEO (Global Earth Observation) through its ocean component GEO Blue Planet and GOOS  (Global Ocean Observing System) through its G7 coordination centre.  The project will also contribute to the development of sustainable practices at sea for marine and maritime applications in line with the Sustainable Development Goals and the International Ocean Governance.

EU4OceanObs will be launched during a virtual Kick-off around mid-November 2020, as soon as the team is operational. We will be providing much more information on this exciting new initiative in the coming weeks.