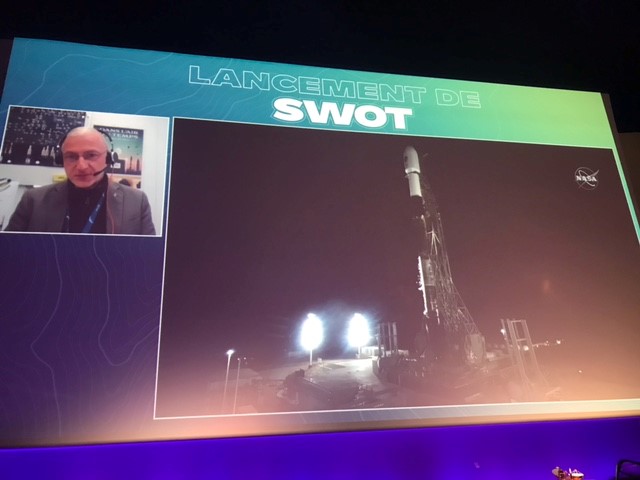 SWOT satellite is in orbit!

The CNES-NASA Surface Water and Ocean Topography (SWOT) satellite lifted off with SpaceX launch services from the Vandenberg Air Force Base in California on Friday December 16th. Mercator Ocean International was at the launch event at Cité de l’espace in Toulouse, which gathered the different French scientific and technical partners of the long-waited satellite mission.

After nearly 15 years of cutting-edge development in radar altimeter satellites, SWOT will be the first of its kind to provide a global survey of almost all Earth’s surface water. Jointly developed by CNES (Centre National d’ Etudes Spatiales) and NASA (the American space agency), and with contributions from the Canadian Space Agency (CSA) and United Kingdom Space Agency, SWOT will deliver precise information on the height of the water in lakes and rivers, and also in the ocean. Measurements will improve our understanding of hydrodynamics at resolutions never achieved before.

SWOT in Oceanography and Coastal studies

The are many revolutionary aspects in the SWOT technology. Besides its two wide swaths covering a ground area of 120km, its altimeter instrument will detect ocean features with spatial resolutions up to 20km, ten times higher than current technologies. This level of detail will provide information on fine-scale ocean circulation. For instance, it will allow “a better description of the mesoscale and sub-mesoscale eddies, important to understand ocean-atmosphere interactions, energy distribution and the earth’s climate system at large,” as stated by MOi Scientific Director Pierre-Yves La Traon.

According to simulations developed by Mercator Ocean International scientists (Benkiran et al. 2021; Tchonang et al. 2021), in collaboration with CNES and CLS, prediction models may be improved by 30% when combined with higher resolution altimeter data like the one provided by SWOT. These are promising results for ocean forecasting.

At the coasts, SWOT will deliver centimetre-level accuracy data on the elevation of the sea. In the future, this can help scientists understand how sea level is rising across the globe and what measures to take when preventing against its impacts. Industries such as maritime transport and fisheries will also benefit from the highly accurate data.

While in orbit, SWOT will undertake a few months of calibration and validation of its signals. Data collection for scientific applications are expected to start within three to six months.

Further reading – see how the Copernicus Marine Catalogue will benefit from SWOT data: