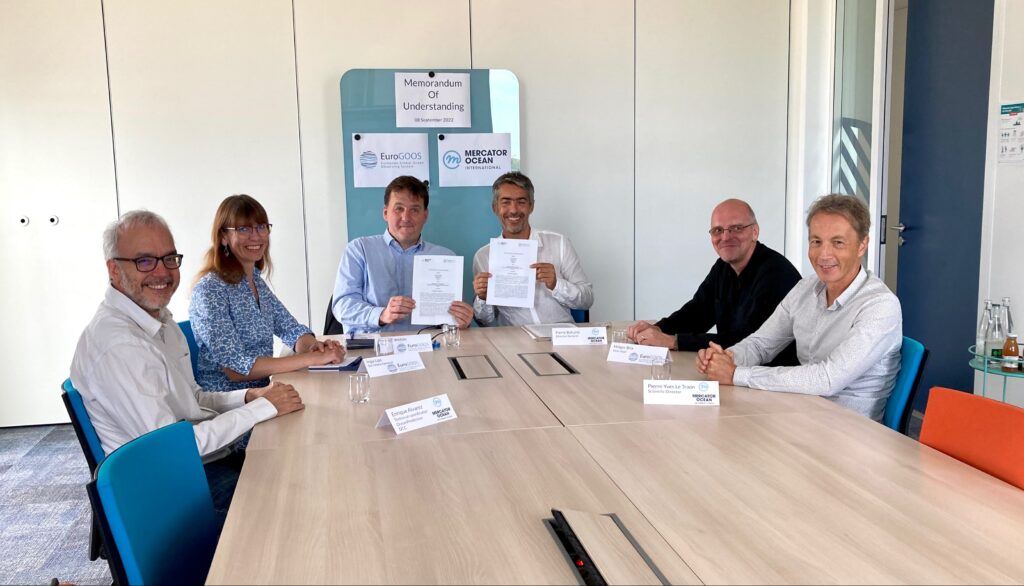 Mercator Ocean signs a Memorandum of Understanding with EuroGOOS

Mercator Ocean International (MOi) and the European Global Ocean Observing System (EuroGOOS) signed a memorandum of understanding (MoU) on September 8, 2022. Since MOi’s inception, it has been a member of the EuroGOOS Association, and this MoU continues this legacy allowing the two organisations to join forces and collaborate on the enhancement of ocean observations and forecasting.

A key part of MOi’s mission is to lead community initiatives to further global ocean prediction, exemplified by major projects bringing together experts worldwide from many groups including the scientific community, national and international political spheres, as well as technologists to create innovative tools to forecast the ocean. EuroGOOS, a community leader in Europe, is an ideal ally and lead partner to support these ocean observation and forecasting initiatives, including the European Ocean Observing System (EOOS) Framework.

“It is a great pleasure to announce the re-signing of a MOU with EuroGOOS, which has been a strong partner in the evolution of Mercator Ocean International.  We look forward to continuing this journey with them, notably with important initiatives such as the consolidation of the European in situ observation system, organising a link with the Copernicus Marine Service and EU Member State national coastal systems, the development of the European Digital Twin of the Ocean, as well as the deployment of the UN Decade Collaborative Centre for Ocean Prediction,”

EuroGOOS and its Regional Operational Oceanographic Systems (ROOS) have played a major role in developing the Copernicus Marine Service Thematic Assembly Centres (TACs) in across Europe. Mercator Ocean International was selected by the European Commission to implement the Copernicus Marine Service, part of the flagship EU Earth observation programme Copernicus.  MOi is already a member of the EuroGOOS Association,  an international non-profit association of national governmental agencies and research organisations,  committed to European-scale operational oceanography within the context of the intergovernmental Global Ocean Observing System (GOOS) of IOC-UNESCO. The new MoU will provide continuity to the collaborative work supporting the Copernicus Marine Service uptake and improvement of downstream services, particularly in terms of in situ and coastal data. EuroGOOS will also join MOi in the development of the European Digital Twin of the Ocean (DTO), and the Decade Collaborative Centre on Ocean Prediction of the UN Decade of Ocean Science for Sustainable Development.

“We are delighted to deepen the trustful collaboration with Mercator Ocean International and with that boosting the development of the Global and European ocean observing and operational oceanography systems. This includes as well the coastal regions as the bio/biogeochemical part of the marine environment. The MoU will intensify cooperation, make us stronger in sharing and utilizing the EuroGOOS member efforts, advancing data provision, filling needs, and bringing in general the operational Oceanography up to another level.”

During this event, EuroGOOS will also present the Kostas Nittis Medal, which is given to an early career scientist. Dr. Babette Tchonang is this year’s recipient, and she currently works at NASA’s Jet Propulsion Laboratory after completing her PhD in Europe and working at MOi.