Digital Twin of the Ocean

The next innovation is to develop a full-fledged European Digital Twin of the Ocean – a coherent, high-resolution, multi-dimensional, multi-variable and near real-time representation of the ocean. Integrating a wide range of existing and new European assets and data sources, the DTO will combine next generation ocean modelling, Artificial Intelligence, Machine Learning, and High Performance Computing, developing interactivity and transforming the knowledge-sharing paradigm.
As the name suggests, we have the technology to create a digital copy of the ocean, on which we can test, for instance, the effects of climate and disaster scenarios on the ocean climate system as well the efficacy of mitigation and adaptation plans. The knowledge generated by the DTO will provide every citizen of our blue planet effective means and agency to better understand the ocean and make informed decisions, collectively sharing the responsibility to monitor, preserve and enhance marine and coastal habitats.

Mercator Ocean International (MOi) has been at the forefront of developing digital models over the last two decades for the global ocean and regional seas. MOi has pushed the field of operational oceanography through the development of numerical mathematical ocean models governed by equations from fluid dynamics, known as “primitive equations”, and their integration into operational frameworks for real-time operations. These numerical equations are resolved by millions of calculations on super-computers. Observation data are then assimilated in the model, i.e. the results of the mathematical model are combined with observation data (e.g. from satellites or in-situ) in order to generate the most realistic possible final representation of the state of the ocean. A numerical model therefore enables forecasters to provide a four-dimensional representation, current, past or future (including 10-day forecasts), of the ocean’s physical and biogeochemical state. With Europe Union’s Copernicus Programme, MOi engaged with a large community of European expert centres to turn this digital oceanography into an operational service for monitoring and forecasting the ocean. 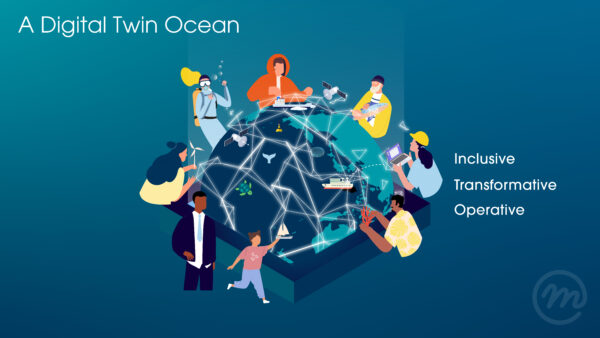 The European Digital Twin of the Ocean

To strengthen EU leadership in protecting the Ocean, European Commission President Ursula von der Leyen launched the European Digital Twin Ocean (DTO) to support the framework of the EU Mission Restore Our Ocean and Waters by 2030 and to enable the ambition of the European Green Deal. At the One Ocean Summit in February of 2022 she explained that a digital twin of the ocean is an opportunity for Europe to turn the lights on in our collective ocean:

The ocean is still largely a great mystery for humankind. That is why Europe is building a digital twin of the ocean. We are connecting our assets – like the Copernicus satellites, marine infrastructure like icebreakers, buoys and underwater drones, and high-performance computing. We will gather the raw data and turn it into real-time knowledge and longer-term predictions. We are putting the power of the digital revolution at the service of our climate. […] Thanks to the EU and its Member States, a digital twin should be operational by 2024. It will make ocean knowledge open-access, available to citizens, scientists and policymakers around the world. It will be a platform for global cooperation. 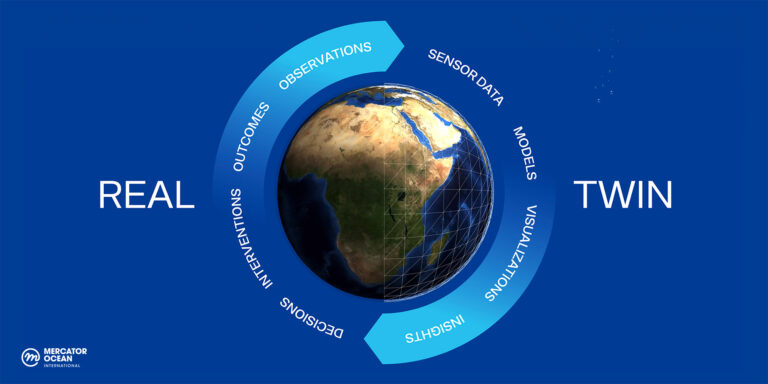 The One Ocean Summit was hosted as a part of the French Presidency of the Council of the EU, and more than 40 countries came together to place the ocean at centre of the international political agenda.  Through the signing of the “Declaration of Brest” at the summit, six European states committed to transform Mercator Ocean International into an intergovernmental institution with the task of building the World’s first Digital Ocean.
MOi has begun to its work on the European DTO through an inclusive and collaborative approach, federating partners on the EU and international level. On the 20th to 21st of April 2022, MOi hosted the first Digital Ocean Forum in Paris, organised under the auspices of the European Commission and the French Ministry of the Sea in the context of the Presidency of the Council of the European Union. The Digital Ocean Forum is a first step towards the construction of the European Digital Twin Ocean using European assets such as Copernicus and EMODnet and by bringing together the European communities concerned.
In the DNA of the European DTO is the spirit of co-creation, support to the development of parallel initiatives, and most importantly the integration and interoperability with other twins and EU projects. The Digital Ocean Forum assembled European and international experts selected on the basis of their proven expertise across multiple fields to agree on the fundamental principles and elements for the European DTO, building on European investments in ocean observations and ocean prediction to ensure that an ‘ocean knowledge service’ emerges from the DTO to meet user needs.

The event included five working groups with experts from across Europe dedicated to exploring different facets and needs in the creation of the European DTO. Thanks to collaboration and participation of over 70 experts in these working groups, a comprehensive report on the outcome of the event will be presented to the European Commission by the end of May that compiles and synthesizes the guidance received throughout this process. Experts at the Forum also highlighted key areas requiring continued communication and collaboration across European DTO partners. The highlights of the Forum have been published and can be read here.

The European DTO will be fully compatible with other digital twins, notably the Destination Earth (DestinE) architecture, led by ESA, EUMETSAT and ECMWF. From data integration, to using euroHPC, to data exploitation, the DTO will be fully aligned with the DestinE phase 1 Digital Twins and strongly support the EU’s Digital Strategy and Green Deal Package.  In terms of connecting with other twins, there are two main levels, the integration and collaboration with other DTOs (local or from outside Europe) and the interoperability with others digital twins like those for the atmosphere, hydrosphere, and even commercial systems (such as windfarms).