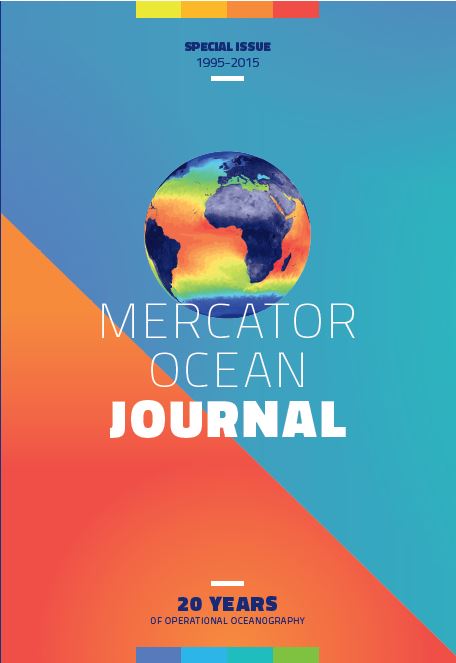 For its 20th anniversary, we at Mercator Océan would like to express our pride in being part of the French, European and International operational oceanography community. Mercator Océan has been involved in many projects or working groups over the last 20 years, among which, GODAE OceanView, MERSEA, MyOcean, GSOP, ICE-ARC, CLIVAR, Nemo Consortium, Mercator Vert, Clipper, Drakkar and many others. The work we have done on our own and with our partners has strengthened the operational oceanography community. Mercator Océan is justly proud to be part of this concerted effort. Since its founding in 2001, the Mercator Océan Newsletter has been a regular forum for many scientists from different backgrounds; for instance it is a space in which, as odd as it may seem, people working on research as far removed as theoretical data assimilation techniques or on elephant seals monitoring the Southern Ocean all share the same objective of a better understanding of the Ocean. It means personal engagement of many scientists. I would like to take the opportunity in this special commemorative issue of paying tribute to our late colleague, Nicolas Ferry, who made a great contribution to high resolution global reanalysis at Mercator Océan.
The newsletter format is simple and allows 3 to 4 issues a year with a specific theme per issue, thus publishing the latest scientific results from various scientific teams in the same place. This is convenient in that it provides readers with several scientific theories or results on a given theme, but also in that it strengthens a feeling of belonging to a community among authors who have the same objectives of better observing, modeling and thus monitoring the ocean. Building up the operational oceanography community and sharing scientific ideas are important objectives for Mercator Océan.

Mercator Océan has been entrusted by the European Union to implement the Copernicus Marine Environment and Monitoring Service (CMEMS). This new mandate comes with a set of demanding constraints and challenges. An operational service is one for which products have to be made available promptly in order to meet user requirements. Eric Dombrowsky, with whom I created Mercator Océan before he became its first scientific director, has always been the first to defend this idea that science was a major asset of operational oceanography in building a strong value for users. Far from driving us away from science, we believe this European mandate gives us an opportunity to ensure that scientific progress remains a strong asset of Mercator Océan and CMEMS in the operational phase.

At 20 years old Mercator Océan has now come of age and this special issue of the Newsletter encourages us to pursue our endeavors to develop tomorrow’s operational oceanography systems.