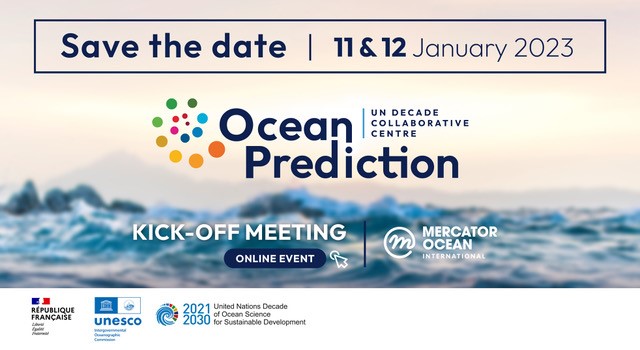 We are very pleased to invite you to the online OceanPrediction DCC (UN Decade Collaborative Centre) kick-off meeting on January 11th & 12th 2023.  Announced by the IOC-UNESCO during the UN Ocean Conference in Lisbon in June 2022, OceanPrediction will be officially launched with this kick-off meeting. Hosted on a collaborative platform, it will be an interactive event, centered on community building and connection of different sectors and activities.

The agenda will comprise live conferences, roundtables, and regional discussions, but also permanently opened exposition halls with virtual booths showcasing different operational ocean forecasting systems around the world, UN Decade programmes, and success stories from the ocean forecasting community. Networking features such as chats, business cards, posts, or surveys will furthermore allow OceanPrediction to start connecting our community. A wide audience is expected, from scientists to users and decision-makers, or persons interested in the topic.

Join us and onboard the platform now!

Connecting the world around ocean prediction

We want to give every citizen on our blue planet the power to understand what is happening or will happen in our ocean, and ultimately to our planet.” – Pierre Bahurel, Director General of Mercator Ocean International

OceanPrediction will be, first and foremost, a global, transversal, and cross-sectorial community built around ocean forecasting. Working in close collaboration with other Decade coordination bodies and actions, OceanPrediction DCC will promote the co-creation and development of ocean forecasting capacities worldwide. Serving the United Nations Decade of Ocean Science for Sustainable Development objectives, the centre will raise ocean literacy and public engagement, while inspiring standards, best practices and tools to build an ocean science-to-service global framework centered on the principles of accessibility, interoperability and integration.