7 years of successful implementation of the Copernicus Marine Service

The Copernicus Marine Service is now an indispensable global operational marine service, serving to protect the marine environment and biodiversity, combat climate change and support the blue economy. It embodies not only the vision, but also the major commitments of the EU for a sustainable ocean. It can also claim a fourfold European label on Space, digital, scientific and environmental sectors and I am very proud of this, as I am particularly proud of the network of contractors and partners with whom we have been working for years to design and improve the Service. Through the Copernicus Marine Service, Mercator Ocean International has created the first digital ocean accessible to all. #WeAreAllOceanCitizens – Pierre Bahurel, CEO of Mercator Ocean International

Today, the Copernicus Marine Service under the custody and management of Mercator Ocean, has become a scientifically validated operational oceanography service. It provides free, regular and authoritative data, and information on the Global Ocean and regional European Seas, and offers expert ocean analysis, user support and training resources. Accurate, global marine data and knowledge, akin to that provided by Copernicus Marine, are needed more than ever to support informed decision-making in the face of climate change, changing marine environments, loss of biodiversity, and the fast-growing Blue Economy. Consequently, Mercator Ocean has worked hard to establish the Copernicus Marine Service as an indispensable resource and tool to support EU policies and goals in which the understanding of the current state of the ocean and predicting its future play a critical role. 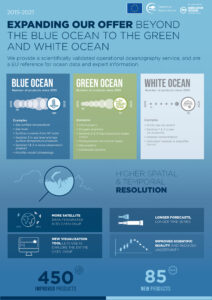 The Copernicus Marine Service wouldn’t be where it is today without its valuable network of dedicated European marine data producers, making up its seven Monitoring and Forecasting Centres (MFC) and eight Thematic Assembly Centres (TAC). Building on the existing network of partners established by the EU’s MyOcean project led by Mercator Ocean as part of the pre-operational groundwork for Copernicus Marine, the network of dedicated European data producers has been strengthened since the onset of Copernicus Marine. New producers added in this first Copernicus phase, include the Wave and multi-observations TACs, and the Black Sea MFC. The Ocean Colour TAC welcomed a new partner consortium to provide new high resolution ocean colour products.

Close partnerships with global leaders in the collection of satellite and in situ earth observation data, such as EUMETSAT, ESA and GOOS have also helped build Copernicus Marine’s authoritative and quality-controlled marine data portfolio. With all Sentinel satellites now being fully operational and the growing array of in-situ technology, Mercator Ocean will continue to ensure that Copernicus Marine makes the best use of all available data sources to increase the quality and range of the Service’s data and products.

When designing MyOcean a decade ago and transitioning to operations in 2015, we didn’t know that we would achieve so much. Copernicus Marine is today more than what we expected. In addition to the plans with ocean physics, we have been able to accelerate and develop the Green Ocean with biogeochemistry models, to operate waves models which are part of our “gold” products. A lot has been done on the Arctic as well, on ocean climate monitoring, and we have set up what we can call already a digital ocean. The success is there but we need to keep moving to remain world leader, and target next big societal and policy challenges, such as coastal zones and biodiversity,” Fabienne Jacq, European Commission, DG Defence, Industry and Space

Mercator Ocean has infused a user-driven approach in the Copernicus Marine Service with the objectives to simplify data access and enhance user experience. Today, Copernicus Marine has over 32,000 subscribers from almost 5,000 organisations, with about half of its user base in Europe and the rest spread over Asia, the Americas, Africa and Oceania. Since 2016, Copernicus Marine products have been downloaded over 4,3 million times, representing over 10,000 Terabytes of data. With its much larger product offer, Copernicus Marine proudly caters to the user needs of all Blue Markets; from policy-makers, to scientists, to industries in the Blue Economy, to the general public.

To attract new users and continue to inspire active and former users, Copernicus Marine has put 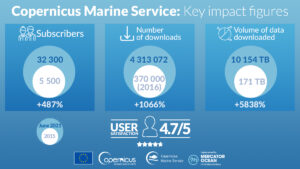 in place a variety of ocean literacy tools freely accessible from anywhere in the world. These include over 200 providing concrete examples of applications developed using Copernicus Marine products, in different Blue Markets, from sustainable coastal management to polar environmental monitoring, to supporting EU directives. The Service also launched a useful interactive data visualisation tool in 2020, MyOcean viewer, available in three versions, from beginner to expert level.

Over the years, Copernicus Marine has systematically collected feedback from its users, which has been valuable to improve and adapt the Service and its offering. The Service has also increased its user support by organising a series of training workshops every year targeting different audiences, which have been attended even more widely since the service started hosting them online. Mercator Ocean also took the initiative to set up a manned service desk and a chat-box to make it easier for users of the Copernicus Marine Service worldwide to communicate with the Service.

Copernicus Marine’s Ocean Monitoring Indicators and the annual Ocean State Report provide comprehensive assessment information on the state of the global ocean and European regional seas. The development of these tools overseen by Mercator Ocean, help raise awareness of the often-unseen changes in marine environments, and the need for informed policies to combat environmental degradation.

Under the Portuguese presidency of the European Council, climate and digital transition are on the agenda and the ultimate goal is to the achieve the objectives of the European Green Deal. Portugal intends to play an important role and contribute to these objectives of the European Union’s policies, so oceans and Space will be considered as fundamental Portuguese priorities during the European Council presidency. The target is high, but the time to act is now, and for that the work developed by the Copernicus Marine Service is fundamental. The next European Multiannual Financial Framework has an important focus on the restoration and protection of the environment, and Copernicus II will certainly be a key tool – Manuel Pizarro, Member of the European Parliament, special guest at the Copernicus Marine Service General Assembly in January 2021

Today, Mercator Ocean engages in a wide range of collaborations and partnerships to increase awareness about the ocean and the important role of the Copernicus Marine Service.  From educational modules with the United Nations, to participation in international events like the Our Ocean and COP conferences, to exhibitions in museums and aquariums.

A more ambitious chapter towards an EU green and Digital transition

Mercator Ocean is excited to continue to steer and operate the Copernicus Marine in this next chapter of Copernicus 2 for the years 2021 to 2027. With the strong foundations set in Copernicus 1, the Copernicus Marine Service will focus on responding to ocean challenges supported by more ambitious projects as presented at the Copernicus Marine Service General Assembly in January 2021. New focus will be on thematic knowledge hubs and improving data collection and dissemination on European key strategic areas such as marine biology, climate and coastal regions and the Arctic. The Service will also aim to better support EU policies and directives, increase its user base beyond Europe and in emerging blue markets such as ocean energy, desalinisation or blue biotechnology and infrastructure (see the Blue Economy report 2021). In today’s digital world and in line with the EU’s Green Deal and Digital Strategy, Mercator Ocean will also ensure that Copernicus Marine’s catalogue and services have a robust digital component, capitalising on artificial intelligence, machine learning, neural networks, and ultimately evolving the already underway digital twin of the ocean vision.