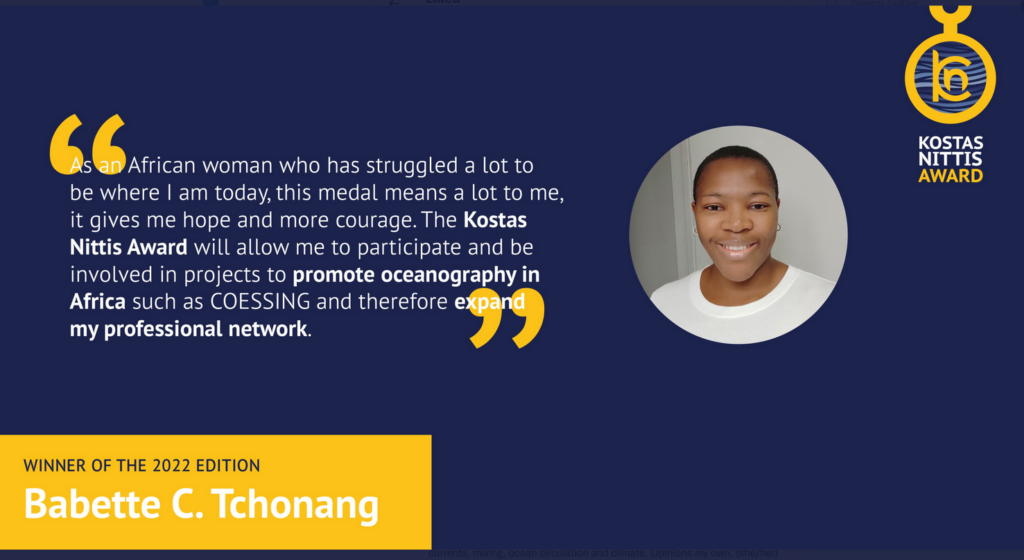 On 8 September 2022, the European Global Ocean Observing System (EuroGOOS) officially awarded Dr. Babette Tchonang this year’s Kostas Nittis Medal for her outstanding contribution to operational oceanography. During her doctoral research at Mercator Ocean International (MOi), Babette demonstrated that future Surface Water and Ocean Topography (SWOT) data could be readily assimilated into Mercator Ocean’s global high-resolution analysis and forecasting system. Not only would this significantly improve ocean forecasting in Mercator’s system, but the results extend to the Copernicus Marine Service, which MOi has been implementing and enhancing on behalf of the European Union since 2015. With the launch of the SWOT mission on the horizon, Babette’s work presents a proven method to exploit the satellite’s new observing capabilities to increase understanding of ocean circulation and vastly improve forecasting of sea level rise, coastal flooding and related climate change impacts.

About EuroGOOS and the Kostas Nittis Medal

The European Global Ocean Observing System (EuroGOOS) is an international non-profit association of national governmental agencies and research organisations, including MOi, committed to European-scale operational oceanography within the context of the intergovernmental Global Ocean Observing System (GOOS) of IOC-UNESCO. Every year, EuroGOOS awards the Kostas Nittis medal, including a € 3,000 grant, to an early-career scientist for their exceptional work advancing operational oceanography and broader ocean observing fields. The Kostas Nittis award was established in memory of EuroGOOS Secretary General and strategic leader Dr. Kostas Nittis (1964-2014).

Anticipating the wealth of information that will be provided by the much-awaited SWOT mission later on this year, Babette’s work explored the use and testing of data assimilation systems, and the development of diagnostics to assess the value and impact of SWOT data compared to conventional nadir altimeters.  Particularly, her research showed that SWOT observations will better constrain sea surface height forecasts by providing information at spatial scales not previously observed by current altimetry satellites. In essence, this work demonstrates the high potential of the SWOT mission and more generally swath altimetry for ocean forecasting and operational oceanography.

“Before starting my PhD thesis, I had no knowledge in data assimilation. But MOi and CNES by co-funding my thesis, trusted me and allowed me to realize my greatest dream: to obtain a doctorate in oceanography and to pursue my career as a research oceanographer. Thanks to my thesis, on the impact of SWOT on ocean analysis and forecasting, (1) I obtained a postdoc with the NASA Jet Propulsion Laboratory. Here I am doing almost the same thing as in my thesis, i.e. evaluating the performance of the assimilation system by comparing it to a variety of observations, as well as conduct observing system simulation experiments (OSSE) to evaluate the performance of assimilating future SWOT data to estimate the state of ocean circulation at wavelengths of 20-150 km. Secondly (2win the Kostas Nittis Medal. This medal has filled me with joy, hope, it also makes me believe that everything is possible in life if you have the right support. Speaking of support, I will never stop saying thank you to my PhD director Pierre-Yves LE TRAON for his availability, his support and his encouragement, which allowed me to believe again and again in the good progress of my thesis even when things were difficult for me. Thanks also to my Co-director Mounir BENKIRAN for his availability to train me on the MOi data assimilation system, thanks to all the employees and the director of MOi Pierre BAHUREL. Each one of them put a stone to the edifice for the achievement of all this.”

A better estimation of sea level variations, eddies and other fine structures of ocean circulation will then be possible thanks to the assimilation of SWOT data in forecasting systems. This will also help us improve climate models and our understanding of the ocean climate nexus.

The Frontiers in Marine Science journal published two papers on Assessing the Impact of the Assimilation of SWOT Observations in a Global High-Resolution Analysis and Forecasting System (methods and results) with Babette as first author in the second paper:

Babette completed her PhD at MOi in 2021 and currently works with NASA’s Jet Propulsion Laboratory, based in California.

The CNES, NASA Surface Water and Ocean Topography (SWOT) joint mission to be launched late 2022 will complete the first global survey of the Earth’s surface water and map the finer details of our ocean’s surface topography and water bodies over time. The SWOT satellite is set to revolutionise hydrology, with its altimeter capable of monitoring the height of Earth’s lakes and rivers, flood zones, and deep and coastal oceans from an altitude of 891km.