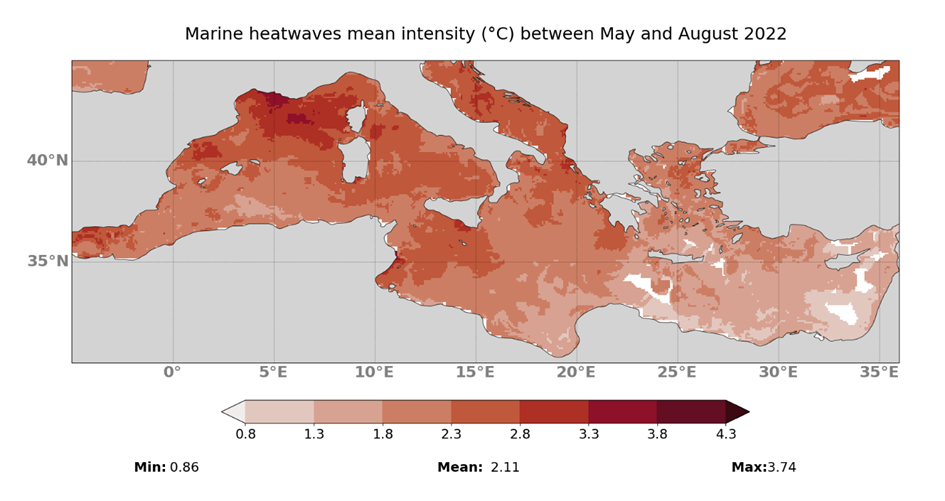 Following a summer of record-breaking heatwaves across Europe, Mercator Ocean International oceanographers have been monitoring their analogue in the ocean. They have examined and analysed the sea surface temperature in the Mediterranean Sea over a series of summers and found this summer to be struck by record-setting marine heatwave events (MHWs), increasing from previous summer in duration, total surface impacted as well as intensity.

Our scientists found MHW events spanning almost continuously the period from May to August 2022, with nearly the entire Mediterranean Sea basin affected – a unique event never observed before. The three-month average sea surface temperature anomalies for summer 2022 (including June July and August) reached values as high as 4.6°C locally, outstripping the summer of 2003, which held the previous record high.

“Like the seasonal wildfires that intensify under climate change, marine heatwaves are extreme events that now occur more and more in the Mediterranean and across the ocean, becoming more frequent more intense and more widespread. These need to be followed and forecasted as their consequences, though not as visible as fires, are devastating for the marine environment. We model these episodes through our digital ocean systems, which are key for adaptation to this new extreme that is likely to be more frequent and severe in the future”, says Pierre Bahurel, Director General of Mercator Ocean International (MOi).

In the last couple decades, MHWs have caused damage in marine ecosystems across the globe. This includes impacts on critical foundation species such as corals, seagrasses and kelp as well as even triggering of mass mortality events. Over the period May to August 2022, all waters of the western Mediterranean region were exposed to at least one MHW, an increase that reflects the large-scale patterns of abnormally warm waters that is observed over the whole area in June, July and August. Over the past five years, sea surface temperature has showed strong and consistent warming in the western Mediterranean. The increase in MHW detections is consistent with the increase in average monthly temperatures, which are exceptionally high, over larger areas.

Dr. Simon van Gennip, oceanographer at MOi, gives some key figures: “All the western Mediterranean experienced at least one marine heatwave this summer. The 2003 monthly record high was surpassed, especially in July, with average monthly anomalies of more than 5°C in some places”.

Ocean warming is particularly visible in the western Mediterranean from 2015 with marine heatwaves systematically present (with maximum extent and intensity in 2003 and 2022). Warming spans beyond simply the surface and is visible up to about 100 meter depth. At this depth, abnormally warm temperatures have been observed for the last 6 years from 2017 to 2022 across the summer (see figure above).

The most direct and dramatic impact of marine heat waves is the triggering of mass mortality events affecting an increasing number of species and habitats. Non-mobile organisms, like coral, algae and sponges, that cannot escape the extreme environmental conditions, are particularly prone to extreme thermal stress. Published by MOi, the Copernicus Ocean State Report 3 explores MHWs and warming in the Mediterranean Sea. It also explains how this, coupled with long-term warming, has led to a disruption in fish ecosystems as some fish species migrate seeking more temperate waters, and species from other regions (sometimes invasive) arrive. MOi has also published Explainers through the Copernicus Marine Service to educated the general public on marine heatwaves and ocean warming.

According to the Special Report on the Ocean and Cryosphere in a Changing Climate of the United Nations Intergovernmental Panel on Climate Change (SROCC IPCC), “Globally, marine heat related events have increased; marine heatwaves…have doubled in frequency and have become longer-lasting, more intense and more extensive… MHWs will increase in frequency, duration, spatial extent and intensity throughout the ocean under future global warming” (1).

A Marine heatwave is an episodic event of abnormally high surface temperatures. It is defined as an event during which daily warm temperature extreme anomaly are observed for at least 5 consecutive days (see Oliver et al. 2018). A daily warm extreme anomaly for a given place at a given time corresponds to temperatures higher than the 90th percentile of the daily temperature distribution obtained using a climatological period (usually spanning 30 years).

The data in this article can be found and accessed through the Copernicus Marine Service.