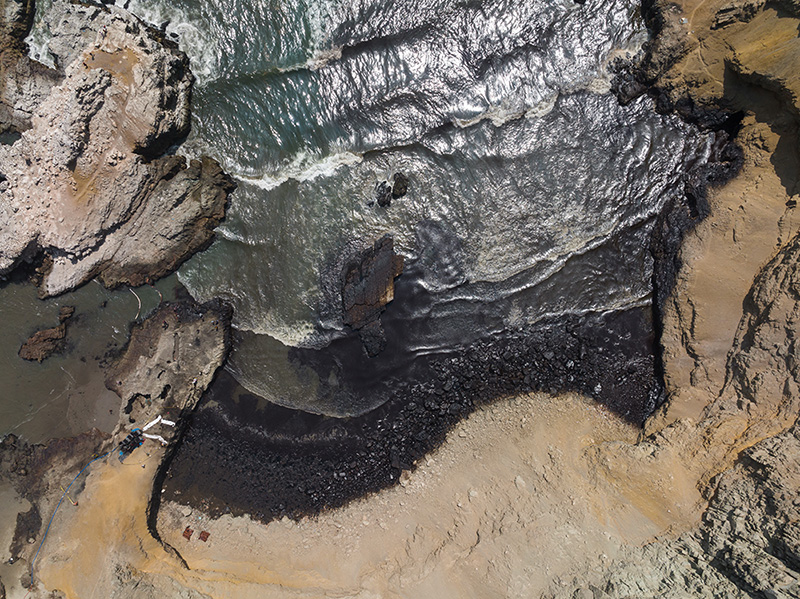 An undersea volcano in the South Pacific kingdom of Tonga erupted with great force on January 15, 2022, triggering a seaquake that hit the Peruvian coasts some 10 000 km away. An oil tanker, probably hit by strong waves while offloading cargo, spilled nearly 12 000 barrels (nearly 1.9 million litres) of crude oil along the Peru’s coastline.

The incident occurred at the La Pampilla refinery, about 30 kilometers north of the Peruvian capital Lima in the Ventanilla district. On January 20, Peruvian president declared an environmental emergency for affected areas, home to some of the country’s most biodiverse ecosystems and to protected zones. The spill has affected many beaches and has left hundreds of fishers without work and threatens two protected marine reserves that provide refuge for diverse of sea life (see figure from AFP below). 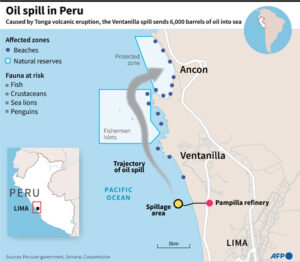 Environmental disasters and human accidents that result in oil spills and dispersal of pollution at sea are unfortunately frequent. Authorities and governments across the world rely on operational systems to react to these events and to mitigate environmental devastation. These are as integral as national weather systems, and they underpin recovery initiatives and help authorities to anticipate challenges thanks to forecasting capabilities. In the case of oil spills, downstream systems can combine our near-real-time and forecasted ocean current data with other relevant coastal variables such as wind to create trajectory and dispersion models of in the wake of such accidents.

Mercator Ocean International (MOi) is committed to supporting global ocean governance, the development of the worldwide ocean observing system, and capacity building for countries constructing and improving their respective operational oceanographic systems. To this end, MOi works closely with the Global Ocean Observing System (GOOS), the Intergovernmental Oceanographic Commission (IOC-UNESCO) and the World Meteorological Organisation (WMO), notably through the Expert Team on Operational Ocean Forecasting Systems (ETOOFS). This initiative is designed to create an official and thorough guide and resources for developing countries in their efforts to establish or evolve their Operational Ocean Monitoring and Forecasting Systems. These systems then act as an operational base on which a myriad of specialised downstream services can be built.

MOi provides a word-class global ocean forecasting service that allows specialised actors to react to environmental disasters with fit-for-purpose downstream models used to track the oil pollution drifts and impacts. For instance, Mercator Ocean’s global oceanic products support operational actors and stakeholders such as CMCC Foundation, the Euro-Mediterranean Center on Climate Change in Italy and the French national weather centre Meteo-France to forecast oil spill trajectories and dispersion. In the past, MOi and CMCC have collaborated to help monitor environmental disasters with use of Copernicus Marine products including on the Wakashio shipwreck in 2020  along the coast of Mauritius and the X-Press Pearl shipwreck in 2021 near the coasts of Sri Lanka.

MOi operates a global ocean system that describes, analyses and forecasts the state of the ocean in operational conditions at a horizontal resolution of 1/12˚. This is possible thanks to an ocean and sea ice numerical model that uses in situ and satellite observations through a data assimilation technique. Such techniques ensure that ocean forecasts accurately represent ocean behaviour and that uncertainties stay minimal. This ocean current product is then integrated by MOi into the Copernicus Marine Service Global ocean Physics analysis and forecast (001_024) model. These types of global oceanographic models may not be able to fully resolve high-resolution coastal dynamics and river inputs, thus for specific regions these are frequently coupled with local models to better describe the small-scale phenomena in the area.

The Copernicus Marine Service, implemented by MOi, gathers marine data from various sources (in situ sensors, satellite observations and numerical ocean and sea ice models) and defuses the free-of-charge data and expertise in a single one-stop-shop service. All Copernicus Marine is open to users worldwide, allowing all meteorological services and operational oceanography centres internationally to use this information in their own local pollutant drift models to forecast potential oil spill trajectories in their respective marine areas of responsibility.

The Peruvian coasts are rich in biodiversity and highly productive in terms of fishing. Its coasts are under the influence of the Humboldt Current, also called the Peru Current. It is a cold, low-salinity ocean current that flows northwestward, in the direction of the equator along the coasts. In this region cold upwelled waters bring nutrients to the surface and intersect with warm tropical waters and support phytoplankton, biological productivity, and important fishery resources. The Peru Current is locally stronger than 50 centimeters per second (daily values) according to the Copernicus Marine global forecasting system.

During this winter of 2021/2022, this part of the tropical Pacific Ocean is under the La Nina phase, which brings even more nutrient-rich waters to the surface thanks to the upwelling. This environmental disaster thus comes at a time when marine life in the area is thriving, and fishing is more plentiful. The nutrient-rich waters give way to an abundance of chlorophyll. The animation below shows chlorophyll concentration, with the dark green along the coasts representing areas of high density. These conditions help to foster the abundant marine biodiversity for which this region is known.