MASSIMILI project aims at developing a multi-data assimilation framework for BGC-Argo float and Satellite observations to be integrated into the CMEMS MED-MFC-Biogeochemistry model system. The assimilation scheme adopted is a variational method (3DVarBio), which is the current assimilation scheme in use in the CMEMS MED-MFC-Biogeochemistry component. Key operators of the 3DVarBio code (i.e. the observation operator, H, the vertical, horizontal and biogeochemical components of the background error covariance, Vv, Vh and Vb respectively, and the observation error covariance, R) have been re-designed and optimized for the assimilation of the BGC-Argo data vertical profiles. BGC-Argo data assimilation has a relevant impact on biogeochemistry by improving the description of the vertical structure. 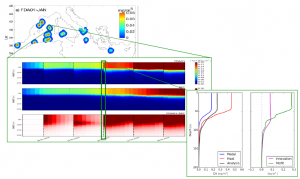 Regarding chlorophyll (Figure I), the novel DA changes the concentration and shapes of profiles during the two most significant seasonal biogeochemical processes (winter surface bloom and summer deep chlorophyll maximum). Further, the observation error (estimated by Triple Collocation method and a-posterior error estimate) plays a major role in controlling the effectiveness of the assimilation. The estimated non-uniform correlation radius length scale, which is of the order of the mesoscale dynamics, together with the actual size of the BGC-Argo floats network, allow to significantly constrain the phytoplankton dynamics up to 10% of the Mediterranean Sea area (Figure I, upper box). We estimated that the frequency of the assimilation step can be optimized in order to enhance the persistence of the innovation and the consistency with the physical field. Regarding nitrate, the impact of the BGC-Argo data assimilation is much larger (in term of spatial scales) given the fact that the corrections change the profiles down to 500 m depth.

Figure 2. Primary production (mgC/m2/y) averaged over 1 week of hindcast simulation (24-31 August 2015, upper panel), and relative anomaly of the analysis run with assimilation of satellite only (middle panel) and with joint assimilation of BGC-Argo and satellite data (lower panel). 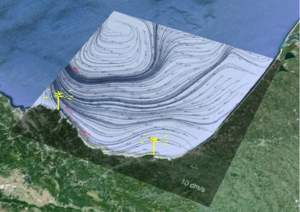 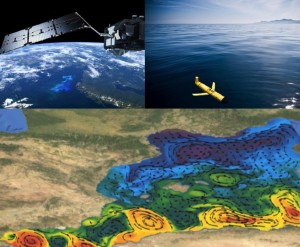