Propagating information back from coastal/regional models to CMEMS

CMEMS MFCs simulations are used by regional and coastal modellers to provide initial and/or boundary conditions to high-resolution models, which hopefully generate more accurate results in their domain of interest. However there is no feedback mechanism to bring the improvement back to CMEMS MFCs and also to reduce possible discrepancies between models (which could ultimately lead to a model blow up). The upscaling method consists in extracting pseudo-observations from the regional model forecasts, and assimilate them in the basin-scale model. This method was tried out using a new nested Nemo configuration covering the Mediterranean Sea and its North-Western part. The Ensemble Kalman filter was used to assimilate temperature and salinity pseudo-observations.

Different processes were significantly modified in the Mediterranean Sea model by using results from the nested model. Obviously temperature and salinity directly modified the position of the Rhône river plume or the quantity of Western Mediterranean Deep Water, and for the former it was verified (using satellite chlorophyll images) that the modified plume is indeed more realistic. Other processes, such as cross-shelf exchanges, or the intensity of the Northern Current, are not directly modified by the upscaling procedure, but the temperature and salinity increments in turn lead to model to modify these processes. Indeed, cross-shelf exchanges are at times very different with and without upscaling, the former indicating a net inflow and the latter a net outflow, or inversely. The large scale current intensity is at times also very different; sometimes a temporal shift can occur indicating that some processes developed more quickly in the nested model, and were transferred to the parent model. In every case, whether the improvements of the nested model are verified to be realistic or not, the upscaling procedure is able to bring them back into the large-scale model (the goal of the procedure is reached).

Concerning some other processes, such as sea surface temperature, upscaling did not significantly modify the root mean square error of the model compared to satellite SST images. However the upscaling procedure by itself does not suffer from defects concerning SST, the problem rather lies into the fact that the parent and nested models are very similar (they have the same qualities and defects), and are both very good or rather bad at the same instants. Therefore, there is not much information to extract from one of them, to send to the other one. It might be that if the nested model was more different from the parent model, or better adapted to some particular aspects of the area under study, it may hence improve the parent model more when using upscaling. 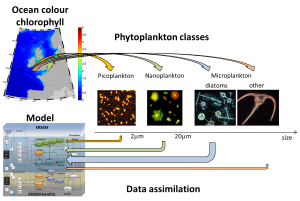 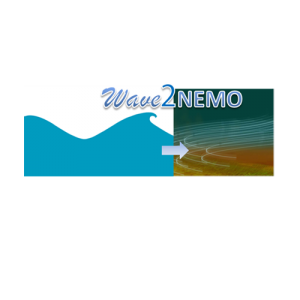