WAVE-OCEAN-SEA-ICE INTERACTIONS IN THE ARCTIC

Abstract: The Arctic is changing very fast. Sea ice is shrinking and thinning. Besides impacts on ocean circulation and climate, this transition also allows new socio economic activities in the region. There is a need for a modelling platform able to simulate and forecast the short and long term evolution of the Arctic sea ice, and more generally the Arctic system.
WIzArd aims at improving our understanding and modelling of the interactions between sea ice, ocean and wave at arctic ocean surface, with a particular focus on the Marginal ice Zone (MIZ). We will couple the Lagrangian sea ice model, neXtSIM, with an ocean model (NEMO) and wave model (WAVEWATCH III), using the configuration CREG12 previously developed for CMEMS. The novelty of neXtSIM lies within its ability to better reproduce the sea ice mechanical properties, as well as the interplay between sea ice and waves propagating into the sea ice pack.Model results will be carefully compared against available observations, looking for key processes required to properly simulate and forecast the evolution of the sea ice pack. 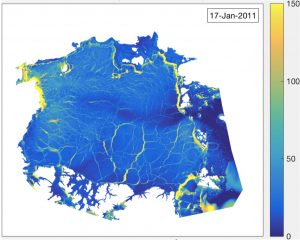 Heat fluxes from ocean to atmosphere (W/m2) simulated by the neXtSIM model in stand-alone mode. Strong heat fluxes through leads in the ice are clearly visible, as well as reduced heat fluxes due to an intrusion of warm air extending from the Kara Sea towards the central Arctic. The coupling with an ocean component will allow the examination of the importance for the ocean of such strong and localized loss of heat. 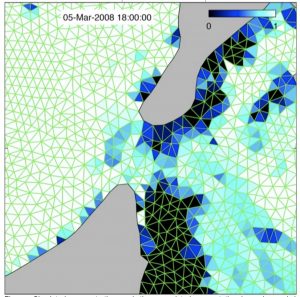 Simulated concentration and the associated computational mesh used by neXtSIM. Due to strong winds at this point in the simulation the mesh is becoming relatively deformed along the coast in the figure’s upper right quadrant. This is subsequently addressed by inserting new triangles along the coast line, leaving the rest of the mesh intact. 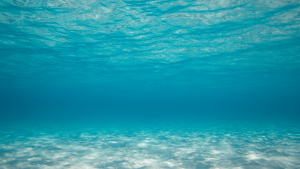