PI and organization: U. Daewel (HZG)

Abstract: With ZOOMBI we aim at improving the zooplankton formulation in operationally used marine ecosystem models and thus paving the way for coupling higher and lower trophic levels for operational services. This will be facilitated by implementing both fish and macrobenthos as functional groups to the TOPAZ-ECOSMO model system, which is currently used for operational services in the Arctic Ocean. Not only will this allow a spatially and temporally dynamical description of zooplankton predation, but also a better, biologically founded representation of the benthic-pelagic coupling. In the proposed project, this coupling will be further improved by additionally implementing a new sinking scheme for particulate organic carbon (POC).
The combination of these processes will improve simulating the spatial and temporal distribution of zooplankton in addition to the vertical nutrient distribution and marine carbon export. Since the improved model system will include descriptions for higher trophic level and benthic production this is a first step towards operational services for marine fish and fisheries. To evaluate the models potential for this purpose and test the impact of data assimilation for the models performance we propose to conduct Observing System Simulation Experiments (OSSEs) within the frame of ZOOMBI. 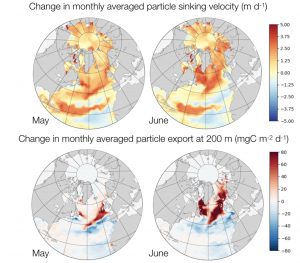 The rate of particle sinking in marine systems plays a crucial role for the biological pump and consequently for the carbon export to the ocean interior. It undergoes an exponential decrease with depth, which varies due to physical conditions, location, seasons, content of biogenic particles and their interactions with the living organisms. By implementing a spatially and temporally variable sinking speed on the particulate organic carbon components of an ecosystem model in the North Atlantic/Arctic Ocean we could show that the sinking speed in deed varies substantially with both time and space leading to a considerably higher particle export in the northern latitudes, while it decreases in lower latitudes. Thus we could represent a complex process in a typical marine ecosystem model without adding much computational costs. This allows increase accuracy of model simulation of the climatically highly relevant carbon export to the deep ocean.