REGIONALLY DOWNSCALED CLIMATE PROJECTIONS FOR THE BALTIC AND NORTH SEAS

Global climate change will have many effects on the oceans and the marine ecosystems for decades or centuries to come. These challenges will co-exist with present pressures from human activities, such as eutrophication, shipping, fishing and use of coastal areas for harbours, tourism and recreation. CLIMSEA was designed to aid developments of protection and management plans by providing essential information on climate-change impacts on one of the most polluted, regional seas in the World: The Baltic Sea.

We extended an existing database of climate-impact scenarios by the use of a regional climate model for downscaling of global climate models and IPCC global climate change scenarios. Within CLIMSEA the so far biggest ensemble of downscaled climate scenario simulations for the North Sea and the Baltic Sea was generated. For this, available climate scenarios from the Coupled Model Intercomparison Project (CMIP) phase 5 have been downscaled with a regional high-resolution coupled ocean – atmosphere model. 36 scenario simulations based upon nine Earth System Models (ESMs) and three Representative Concentration Pathways (RCPs) were carried out and analyzed. In addition, for a smaller number of the ensemble (4 ESMs) corresponding biogeochemical climate change projections were generated. For these runs, a coupled physical-biogeochemical model has been applied.

Due to limited computer resources, regional climate impact studies can most often not make use of the full ensemble and important information on the spread between models will be lost. We developed a method that enables the selection of an optimum subset ensemble that captures the uncertainty in the projections, while minimizing the number of models in the downscaling. The method was performed with respect to user requirements of climate-change impact studies and for key marine climate and environmental variables.

To estimate uncertainties in future projections of the marine ecosystem, the ensemble of 48 projections for the marine biogeochemistry was driven by two Shared Socioeconomic Pathways (SSPs), two RCPs and three mean sea level scenarios. We found that besides model and scenario uncertainties natural variability is an important obstacle limiting predictability of marine ecosystem indicators. We focused on two measurable ecosystem indicators, bottom oxygen concentration and Secchi depth, and studied the impact of changing climate on them. The results show where the most suitable monitoring stations are located in order to detect both the signal of a climate change and changes in the external nutrient inputs at the earliest possible time. Hence, CLIMSEA results are of importance for the design of marine environmental observing systems.

Our framework is general enough to be transferred to other regional seas. 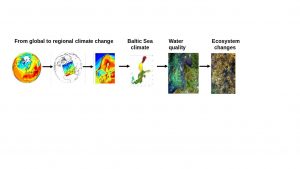 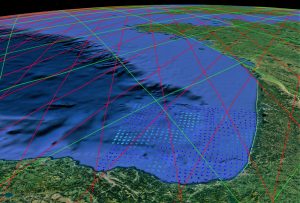 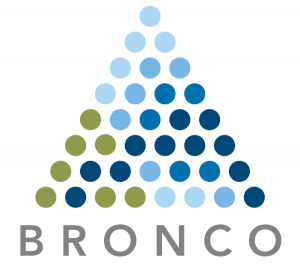